It's a Fairfield to St Sunday Crag 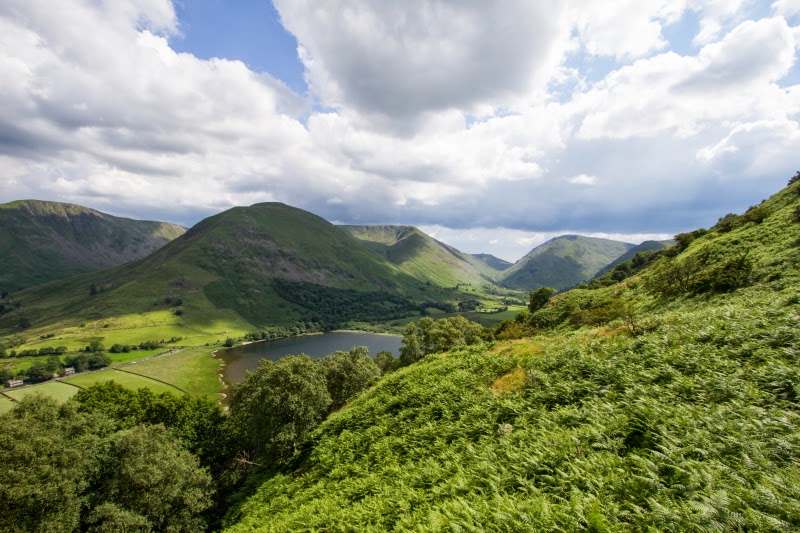 I parked at Brothers water where my first fell waited above, Hartsop Above How.  When paths shown on the map randomly start and stop in the middle there’s got to be a beginning and an end, an entrance and exit, even with sheep paths, unless farmers are now using the RAF planes to parachute them in. There was indeed a path.

A couple of Ravens where having a bun fight; not lunchtime yet so it wasn’t my bun but to be honest if they wanted it I’m not going to argue with them, they’re massive and so are their beaks.  I got to the tree line just to miss a pair of small fast metal birds whizz passed. As I made my way up the slope to Gale crag I stopped to take a photo when some larger slower metal birds glided over Kirkstone Pass and low over Ullswater. You want aerobatics we’ll show you aerobatics croaked the Ravens. 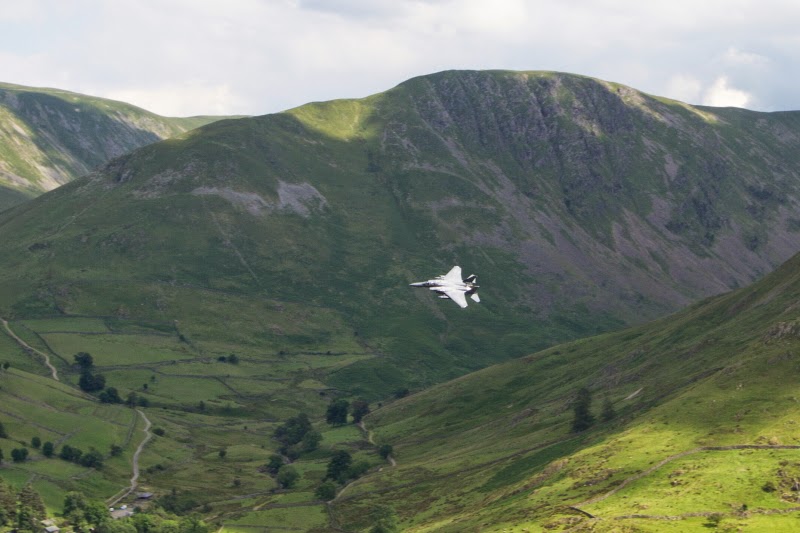 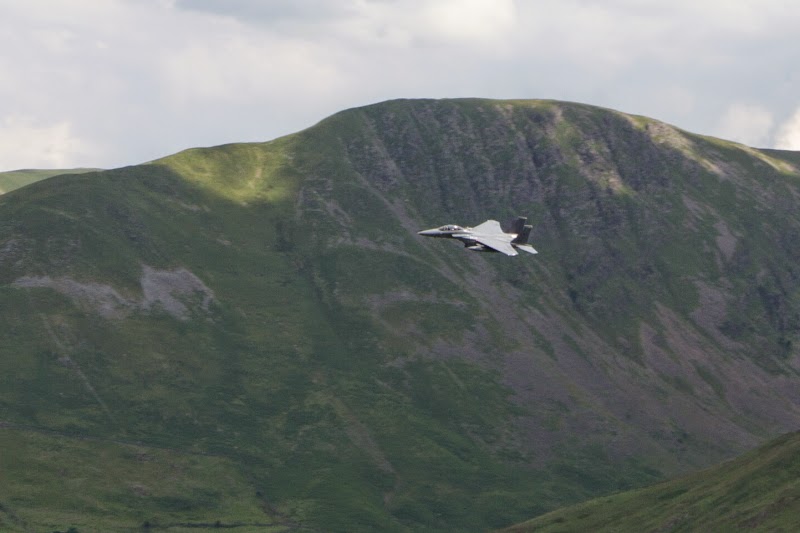 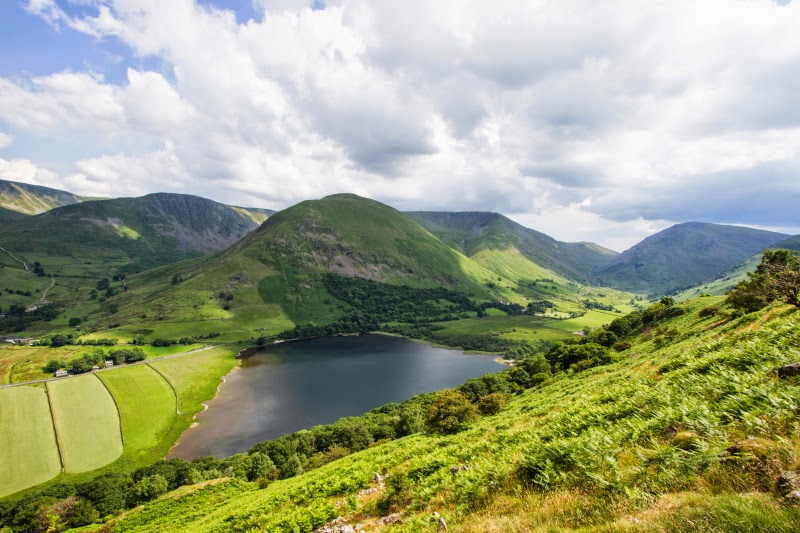 I made my way along the long flat summit of Hartsop above How, taking a moment on Dick’s seat, he wasn’t using it so I’m sure he wouldn’t have minded. As the summit began to fall away I stopped to view my route ahead and looked for the Priest’s Hole which is a cave in the crags of Dove Crag. So far it has be a dry warm year luckily this enables you to pass the peaty bog spots with ease and remain dry. 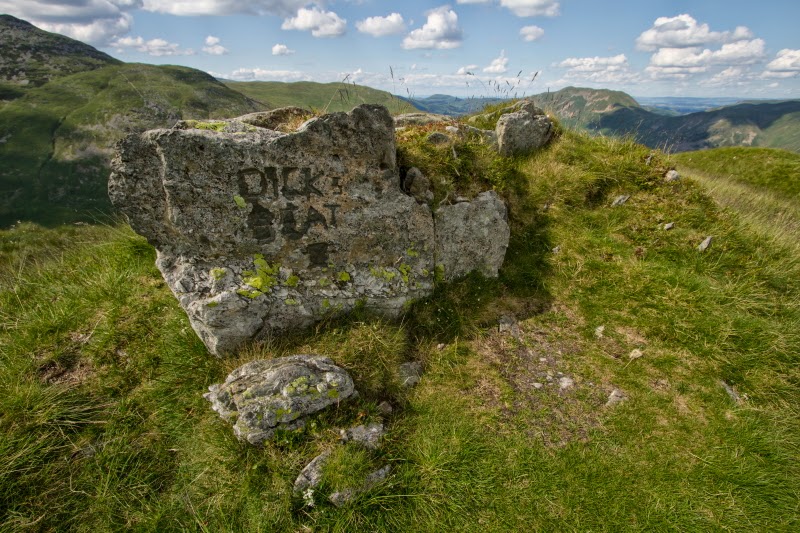 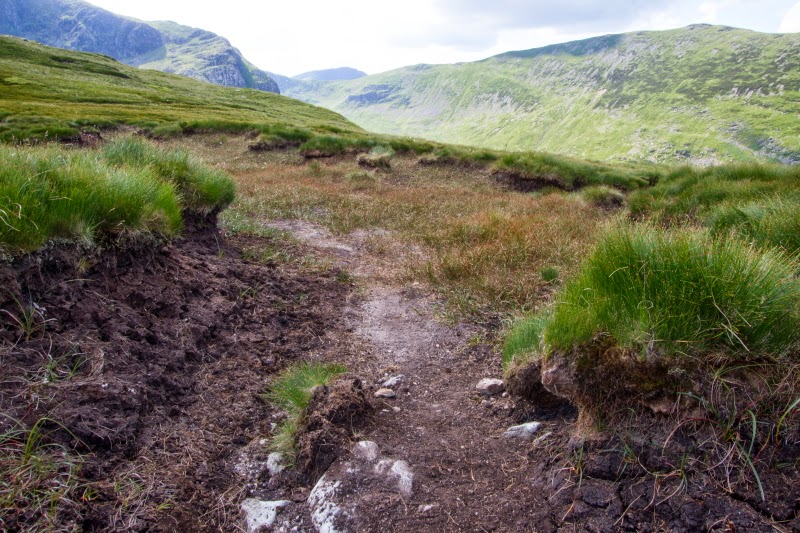 The ridge continued up to Hart Crag but I took a detour down and across to the base of the crags of Dove Crag. You can’t see the cave from the main path that passes down to Dovedale but a small discreet path scrambles up towards it. 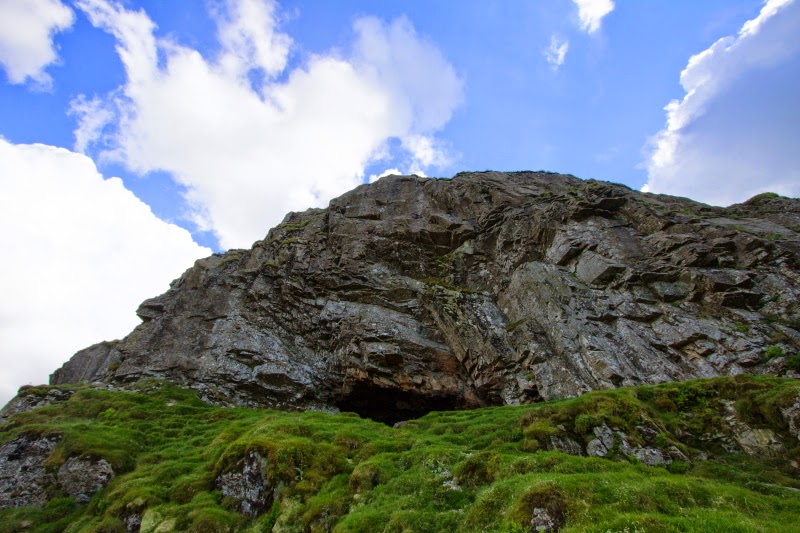 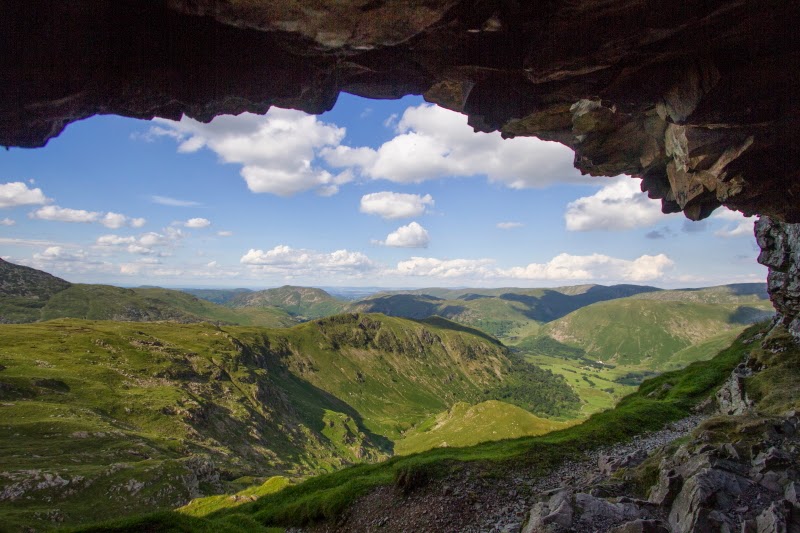 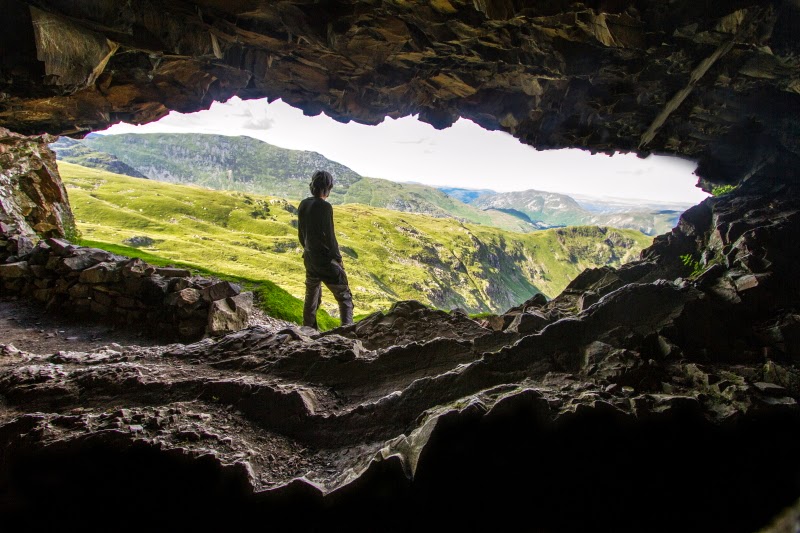 Priest’s Hole is a small narrow cut in the rocks and probably popular with the wild camping crowd. Evidence of cooking utensils, food packets and bedding lay at the back of the cave. After several attempts to get a widescreen shot of me in the cave a couple of sheep went flying over, I’m amazed at their agility clearly something or someone had startled them. It was indeed a group of guys taking an ‘interesting’ approach to the cave.  With lots of branches attached to one of their rucksacks I would say they were going to camp the night with a fire and I suspect a 6-pack or two. 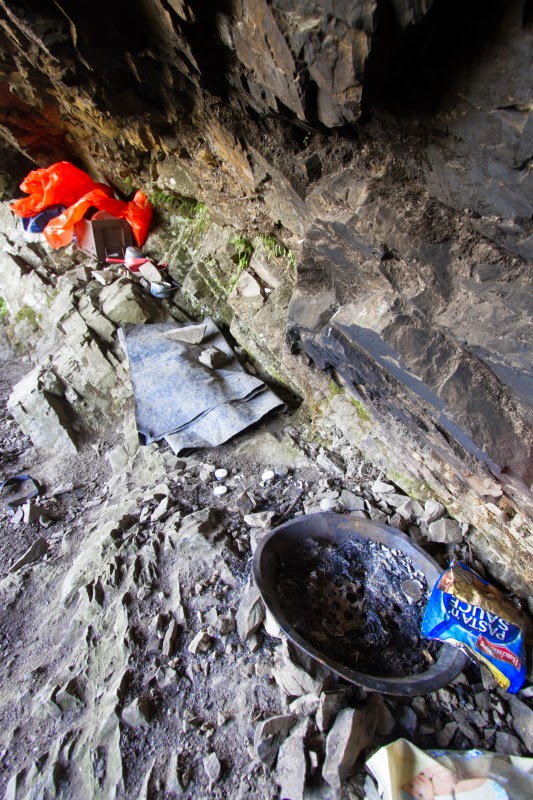 I have always wondered what the wild camping etiquette is if someone has already set up camp in the remote area you wanted to camp in, do you ignore and squeeze in, pitch near by or go elsewhere?  Does it fall under the bothy social code. And when does the idea of solitude wild camping become a gathering. Imagine you planned a nice quiet evening to watch the stars and get up early to photograph the sun rise, would you appreciate the noisy late night or expect a few free beers and join in. 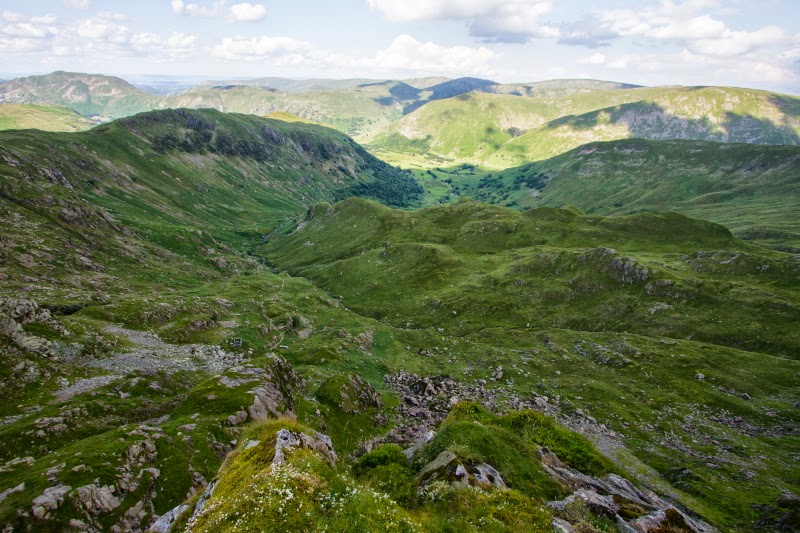 I made my way up on to Dove Crag then carried on up to Hart Crag, passed the head of the valley, Rydal Head where Rydal Beck cascades down the valley into waterfalls above Rydal Mount. Reaching the highest point of the day, Fairfield summit you are able to look down the Grisedale valley and Grisedale tarn. A family had pitched a couple of tents next to the tarn, it looked really inviting, must do that one day.

I looked across to Seat Sandal and took a moment to consider “nipping over there”. It's kind of on it's own so it might end up being done on a seperate hike. It looked too much of a down and up then a return around Fairfield and with the evening sun approaching I decided against it. I shall consider it again when I’m on Dollywagon Pike after having done the Helvellyn ridge.

On to St Sunday Crag; dropping over the rocky outcrop of Cofa Pike down to Deepdale Hause is around a 100m descent and ascent on to St Sunday Crag. The south shore of Ullswater reveals itself as you walk to the end of it's flat ridge. It was now 9pm and the evening sun gave the grassy slopes of Birks a golden glow. 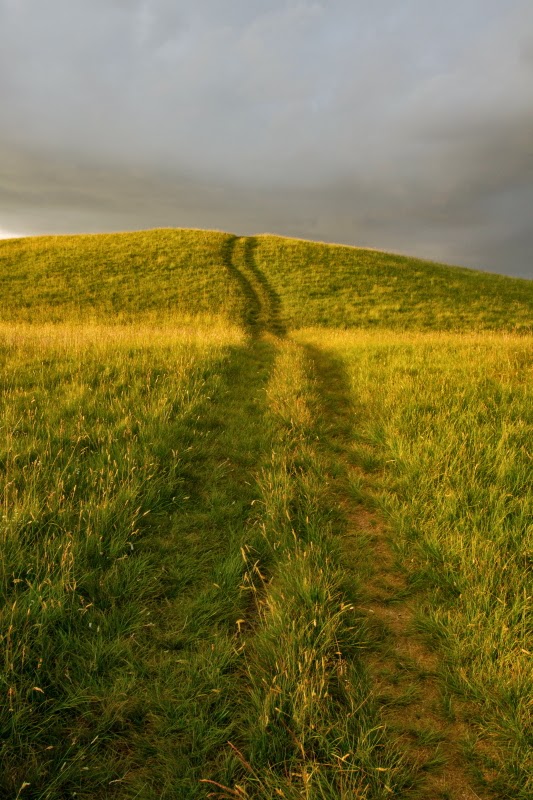 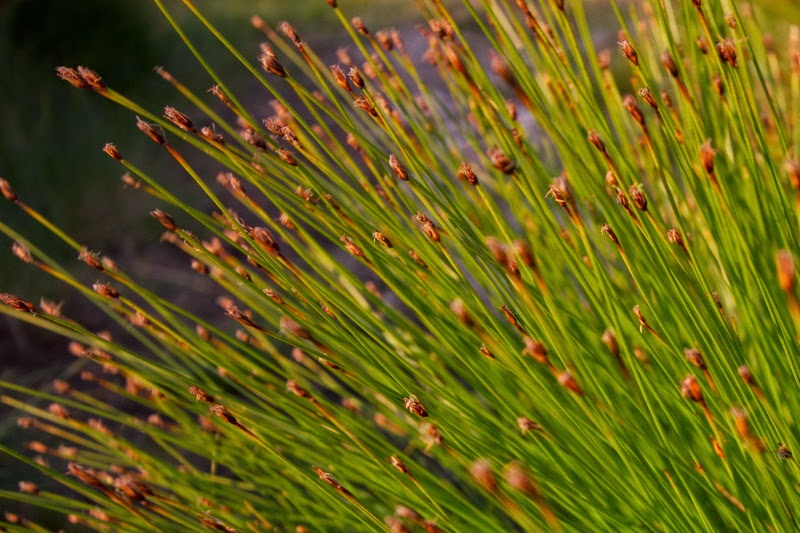 There were no paths marked to Arnison Crag and as the sun was already setting I wasn’t going to try to find a way through moor and crag to get to it, even though again this would leave it out on it's own. As I dropped down the steep path behind Patterdale it had turned dark so donning the head torch I marched the 2 mile walk down the road back to the car. 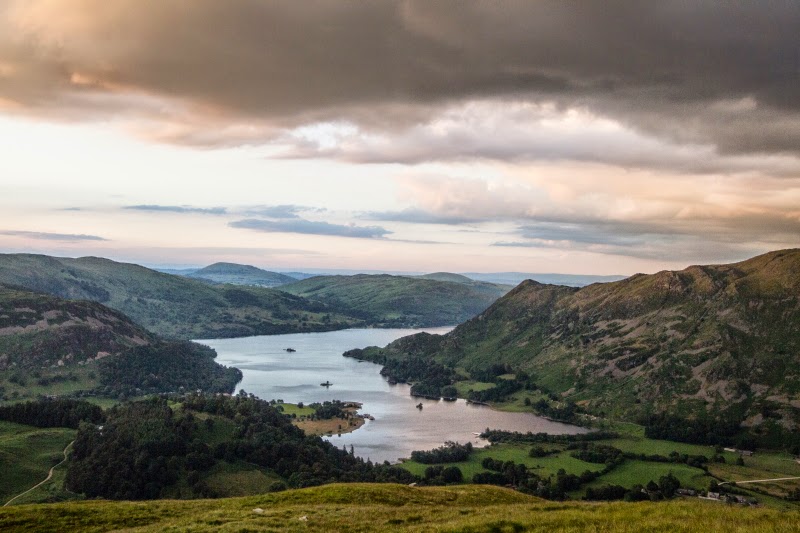 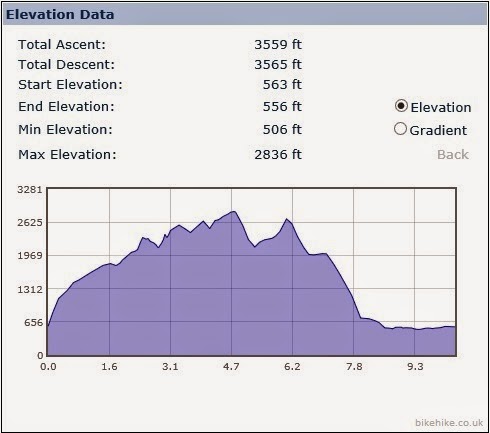 Posted by FellRambler at 15:02 No comments: