Since getting a birthday present last year to make an English longbow from scratch using traditional tools we have joined Spoonclub (Spooniversity) run by Tony Saunders of Ynot Coppice where we have been making various spoons (CumbrianRambler makes spoons) It has been fun to work with wood and interesting learning traditional techniques and tools such as a shave horse, drawknife and spokeshave. 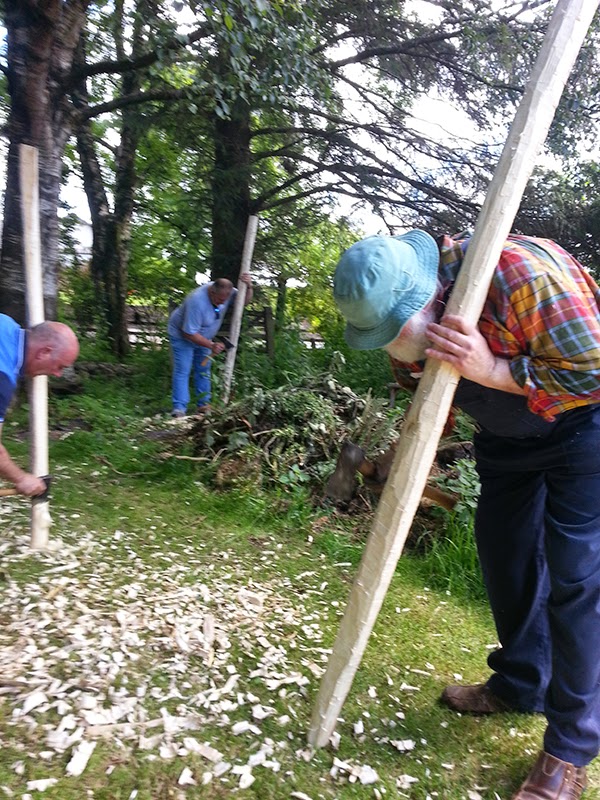 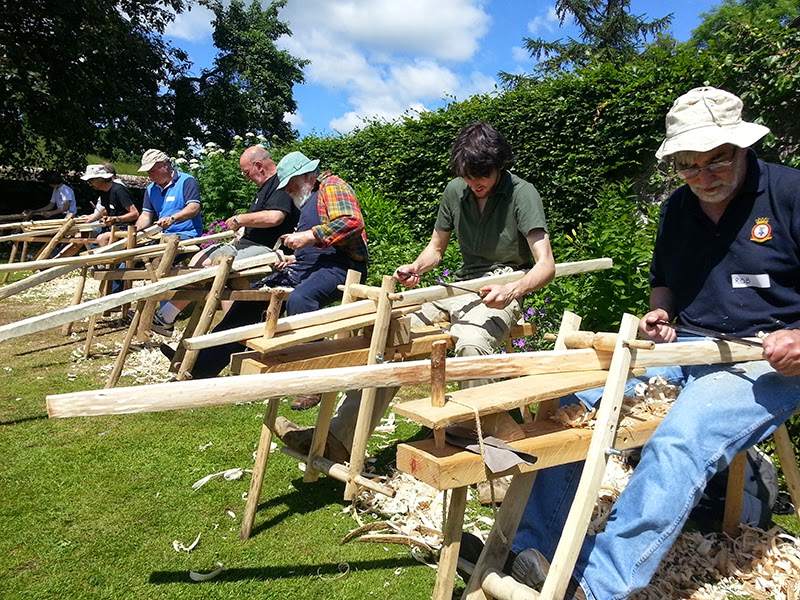 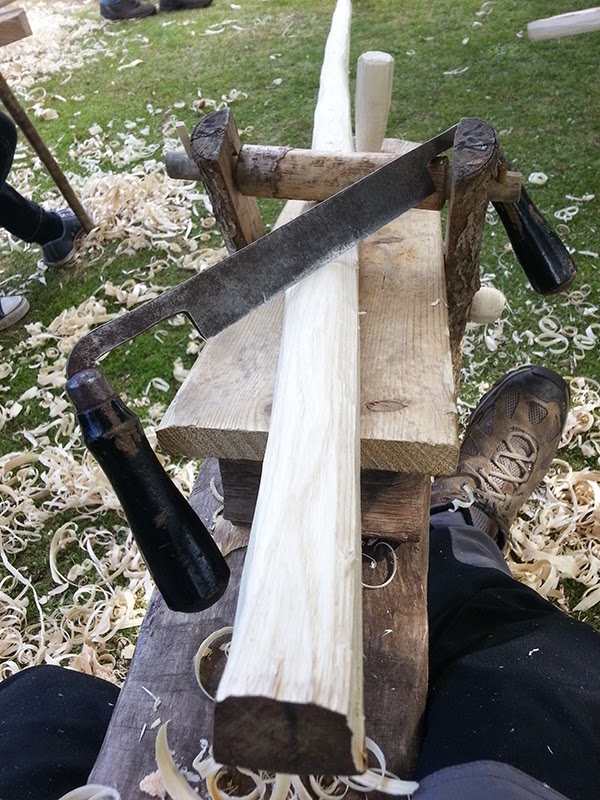 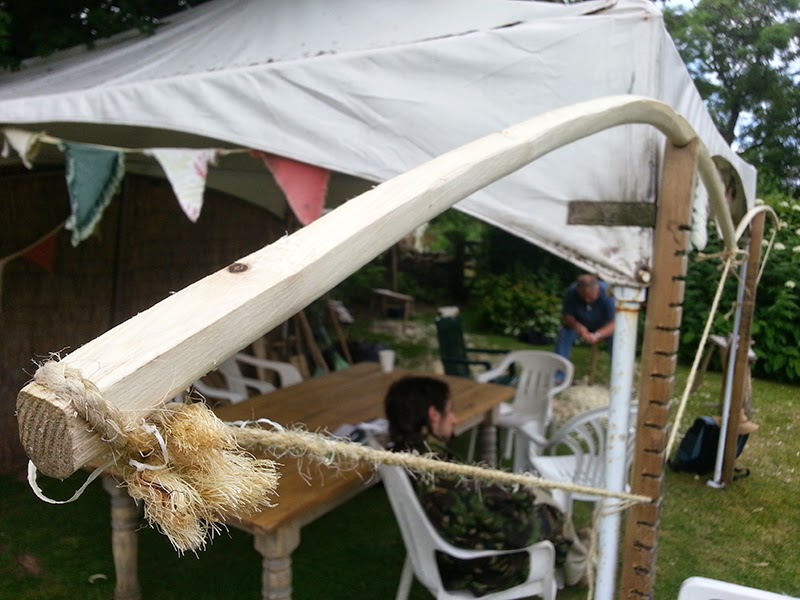 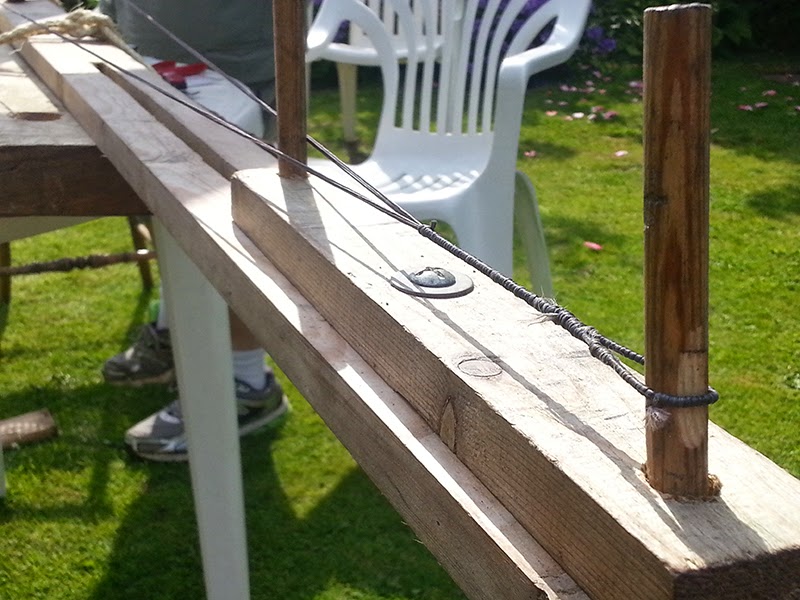 
Another glorious day whittling away in the woods, this time tent pegs for an Agincourt re-enactment. In October it will the 600th anniversary of the battle of Agincourt and my pegs will be there in French soil. Once I finished carving them with a drawknife I tested one out, it works! Though being chunky they probably also could be hurled at the French. Fetche la vache! 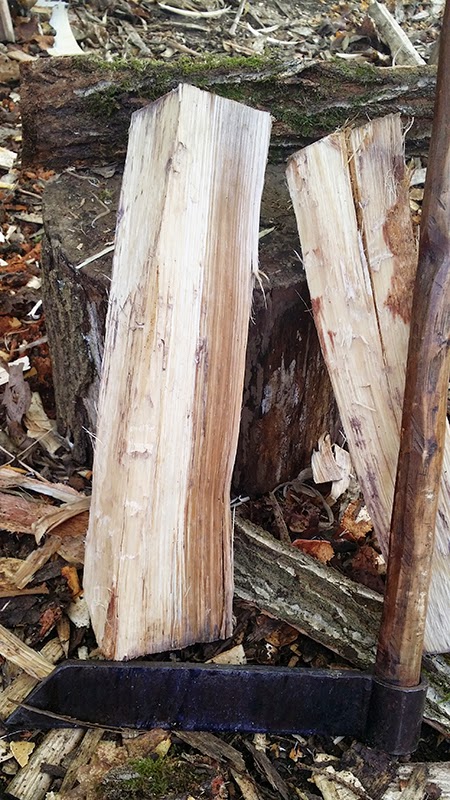 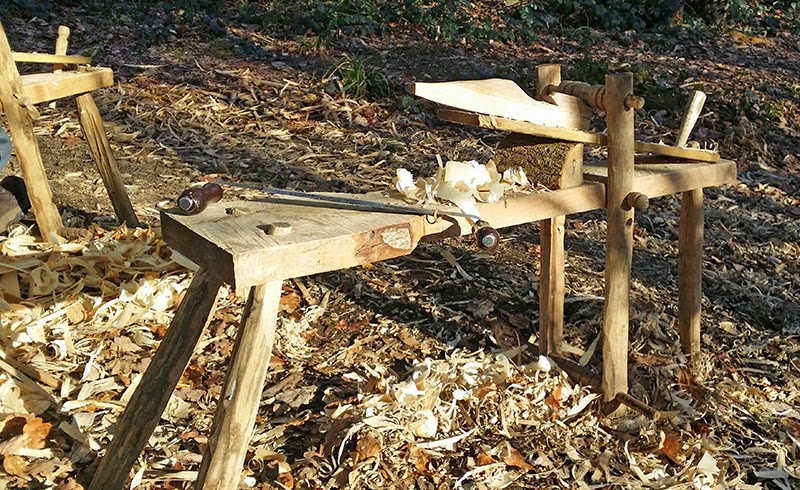 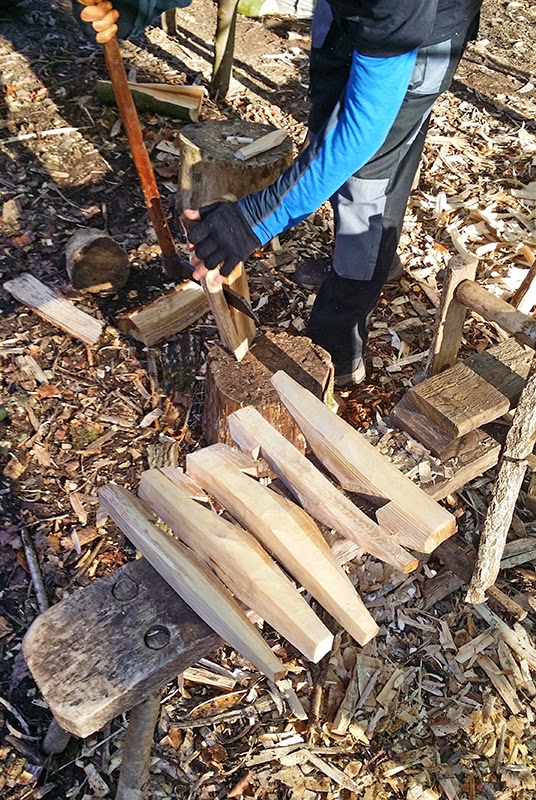 
I was looking forward to helping out with carving and in Leighton Moss too so what's not to love. It took me a while to realise I was probably going to have an audience especially being a sunny Sunday at the beginning of half term. First time on a lathe so no pressure...

First off Tony had to make another Oak Dragonfly for the wildlife garden then on to a rounders bat for the nephews. It's a clever piece of Viking invention the pole lathe and treadle. Cord is attached to the treadle (foot pump) wrapped around the piece of wood and to a flexible hazel pole in the ground or in our case a bungee cord (a fine 20th century invention). As you press down on the treadle, the cord rotates the wood allowing you to use gouges to shape the wood.

Many folk stopped to watch which really didn't put me off my rhythm honest, not that I had any to begin with. It certainly was a work out for the legs but being up the fells a lot I didn't find that an issue. The issue was more of a mental workout. I was quite surprised how much co-ordination you needed to pump with one leg, moving the gouge towards and away from the wood all while also moving it in an even horizontal plane. "Foot down gouge out, foot up gouge in. Foot down gouge out, foot up gouge in..." I was thinking to myself.

I think it showed as a couple of the female spectators commented on men's multi-tasking and rhythm. Not sure if it was a subtle dig at me but to be fair in my case it was true. 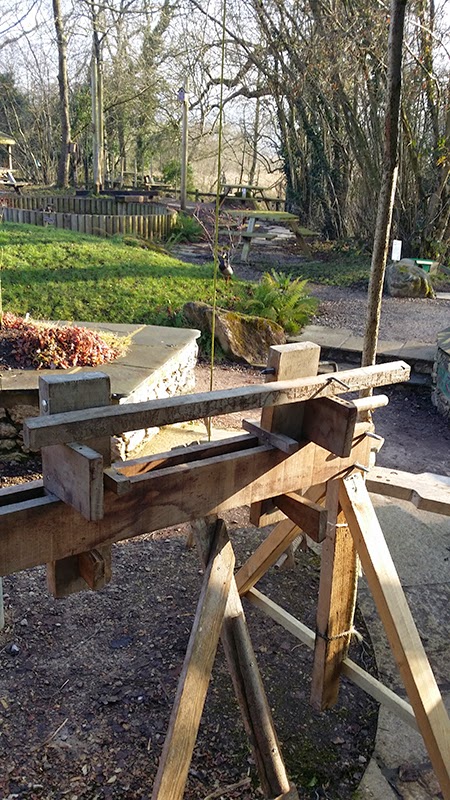 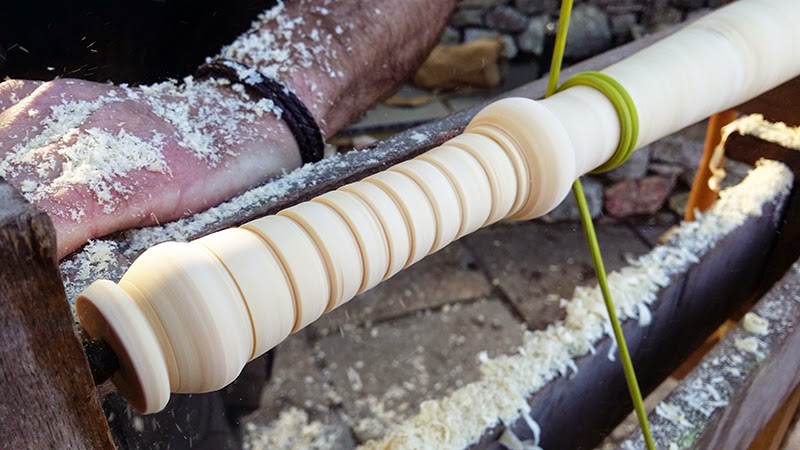 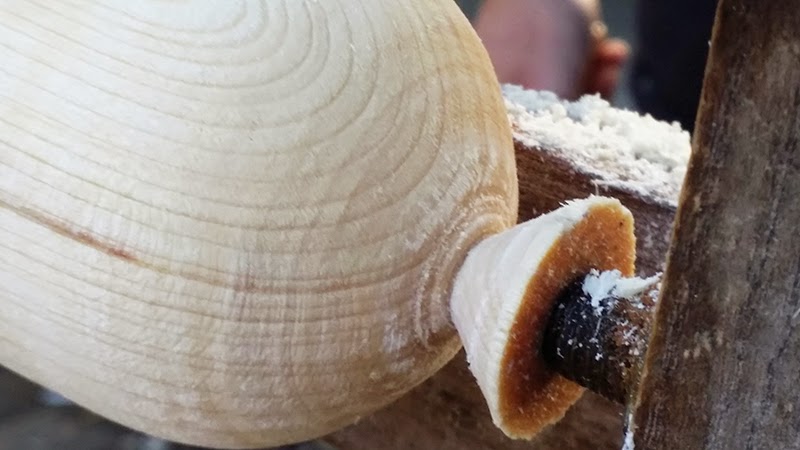 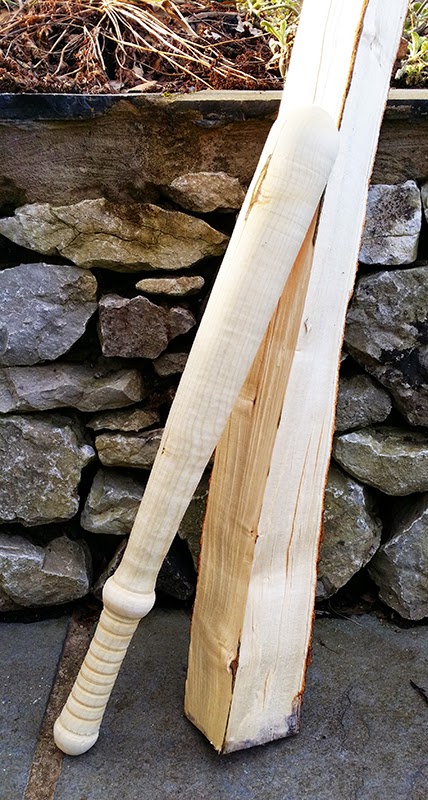 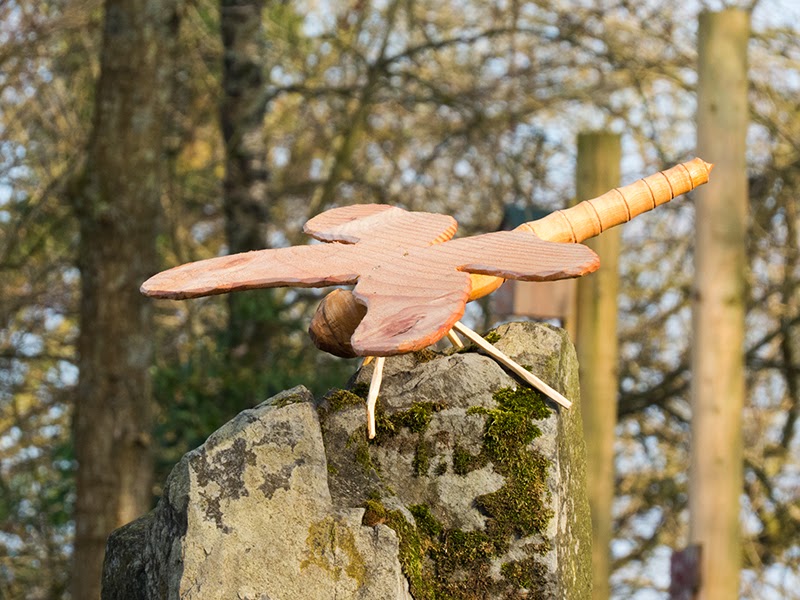 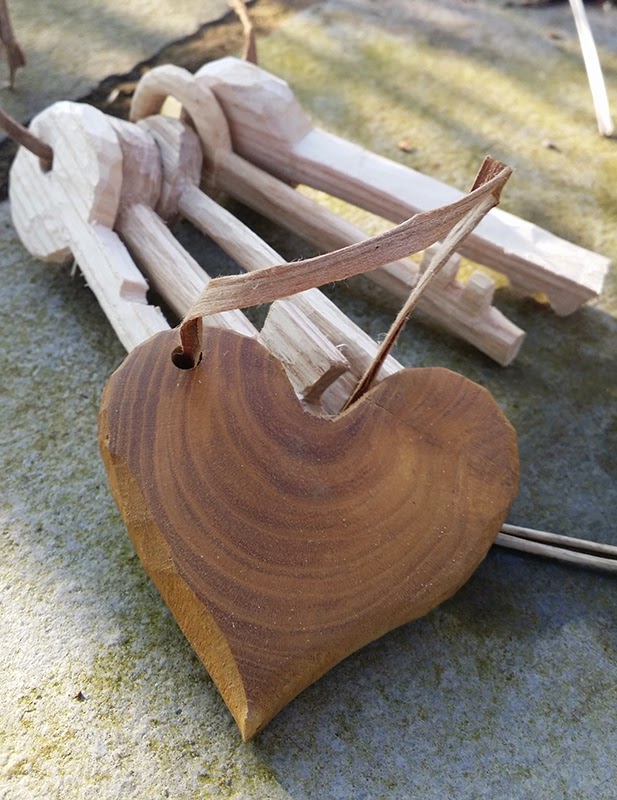